Day two started with a new travel plan, a place called the ‘zu bar’ situated on Ashwem Beach (North Goa).  The place was highly recommended by Unmisha’s friend Amaan. Yesterday was electronic circus and today operation ‘zu’.. not bad!  But we were warned… to reach ‘zu’ one had to manoeuvre a treacherous 90 degree steep road.

Zu cafe was awesome, well i must thank Amaan for recommending us such a cool place… After a crazy Sunburn night, chilling at a peaceful place was not a bad idea, the heavenly beach is so cool that i would definitely would want to go there again n again.

TIP- If you ever go there DONT ever try the kalakhata drink  (black current Zu special) the drink just and i say it again JUST looks nice, i don’t wanna waste my time commenting on the taste of that drink because i would need another post for that. 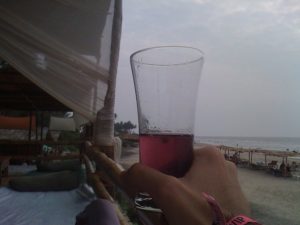 Okay… Now we were fully charged for another crazy Sunburn Day.

We reached right on time to experience yet another killer night and what a deadly night it was! Roger Sanchez was brutal he was unleashing his killer house tunes which literally swept everyone off their feet.

This time I was at the VIP area… to be really honest i found it a little stupid since the vip area was so far away from the stage we could hardly see Roger Sanchez, but the beats were so insane that it could find its way to you, no matter where you are…

The music and the environment created a potent mix helping the adrenalin rush.

After those brutal beats, it was time to check a place called Sweet Chilli. We were told that not too far from sweet chilli there is a haunted place near Fort Aguada…so we decided to check that first… Again there was a warning!!! ”be careful its dark and HAUNTED, last time when I had been there I narrowly escaped the ghosts touching me ”

Ok be serious… that sounds like a scary and pervert ghost… Sorry to disappoint you again, we wasted 10 minutes just looking for that ghost with our head lights down, creating a perfect opportunity for the ghost to scare us, but only two people who felt the TOUCH was Unmisha and Chetan who were sitting at the back seat… I don’t think I need to say anything further 😉

All right any guesses who recommended us that place ?… you’re right, it was HIM again lol

Anyways we all were exhausted when we got there, but I was quite happy with sweet chilli restaurant because of great ambiance and live retro music… we ordered some food and I called for a drink which goes with the name of “Rocket Fuel”. Now that cocktail can really make you FLY, why?… Simple, it’s a heady mix of Whiskey, Rum, Vodka and Tequila!!!